Adam Milovanovic, a tournament first timer on the competitive spirit of Serbia and the School Terca.

There sure aren’t droves of HEMA competitions being held every month; well, not where I live. Sure, we award each other medals, and give a helpful ego-stroking here and there when urgency necessitates it. Internal, albeit official, competitions aside. It is not a unique trait for my club to be organizing sporting events. But the club is special, I mean, they have me as their member, so they must be good, or I am being unreasonably and erroneously biased.

So, let me introduce you to my perspective, imbibed in part by the culture of the appropriately namely “Terca” fencing school I am lucky to be a part of. The name is a reference to a fencing stance used by those that are fans of a more moderate approach to life, of the pragmatists and the like. Get it? Well, Capoferro gets it! (feel free to roll your eyes now).

The name is also a reference to the fact that it was founded or co-founded by three visionary geniuses represented and externalized here on earth in the form of our dear instructors: Zeljko, Stefan and Dusan (in no particular order, as they are all awesome).
Now back to competitions, as we are writing about paving the way towards one, right?
The question that can often define tournaments and their competitors is in: What drives their competitive spirit?

From my experience of HEMA in Belgrade, it is not so much that its members yearn for competing, winning or one-upping each other. In fact, quite the opposite is true.
The relative lack of a competitive spirit and the prevalence of a cautious mind-set by my fellow fencers seems to be exactly what drives and motivates these tournaments. Testing how good they fare in the art, not simply against one another. And the better your opponents get, the more honest of a mirror to the art do they provide.

And this is based not on one-upmanship, but rather a distinct lack of it. Perfectionism is often a destructive force, and it must be said, while many sportsmen aim for perfection, there is a whole different aspect to it that is inherent to HEMA.

If you are being honest with yourself, can you truly afford being less than perfect, when struggling for your life fending off a meter-long razor?

I admit, considering this perspective is a good way of glorifying a discipline. But that glorification stems from an ideal. Let’s for a moment look at the concepts behind the ideal, as that is what most disciplines are in their core, made and broken in the backdrop of the ideas that give them purpose.

Those motives, glorified or no, that lay behind each movement, action and principle, are the carriers of the discipline’s virtue.

If we are unsure of what the purpose is behind a martial discipline, sport, chant, or piece of exceedingly obtuse modern art, we ever so often find ourselves misplacing its value, trying to find, or worse, force a place for the puzzle piece to fit in.

And what is context, but a backdrop for an overly detailed piece of noise that when looked at as a whole starts making sense?

Pixels in an image, jagged edges of random color swatches, incredibly elaborated or frustratingly succinct copies of fencing manuals that have suffered ages of misinterpretation, when not condemned to being simply forgotten by time.

Not one of these pieces becomes worthless for their inherent lack of value, but as with competitions, for their necessity coinciding only with the needs of their time, their moment. The context simply being taken for granted and at face value.

You cannot trust what you see, even if you are looking at all of the pieces right.
In any tournament, the goal is to find “the winner”, and one will always be eligible for the title. But the means by which our winners find their own “goals”, or let’s say: their win, well, they may vary wildly.

I am not competitive by a long-shot. I have learned from my instructors and betters, to respect the blade, respect the opponent and respect oneself. With the priority being in oneself. If the goal of a competition is to strike the opponent for more points than he had stricken you, there are two very general ways to go about it. Forgo the introspection and go for points. Alternatively, you can rely on those devices that protect you, that respect you and the blade whose offence you are trying to foil.

Both of these, albeit extreme, mindsets turn out and act out similarly on the fencing ring, from a spectator’s point of view. We can’t help but be clumsy, late or brash when under tension, pressure and anxiety.

But from these two mindsets are produced fencers who may present stark differences in opinion, when asked: what it means for them to win.

It is within those that wear HEMA on their sleeves and pillows, where you will find fencers that take nothing for granted. Who ponder on whether or not they would be able to execute said devices were the stakes real, or how brash and eagerly have they behaved, and would they have done so had their lives, or simply a higher chance of injury been on the line.

It’s thoughts like these that separate those engaged in a range of such hobbies and professions.

Putting the results of their actions in perspective, in the right context and in their rightful place. Not where we want the puzzle pieces to fit in, but where they were meant to be.

And even if we cannot find the appropriate place, and there is an empty bevel and space surrounding a completed concept we have yet to find the appropriate slot for, we aspire to be brave and wise enough to simply move on and keep reaching. To appreciate the glimpse of a bigger picture and perspective given to us as a result of so much love, toil and sacrifice, dearly given. To rekindle the old in the light of the new.

A tourney for me and many others who are getting ready for Swordplay 2018 is an experience to learn from. And perhaps understand better why our perspective on HEMA is shaped the way it is. Why there is a divide between the sportsmanship and the martial discipline. How they coincide and how they clash principally, and to see people devoting their free time, hours and years of hard work either pay off, or prove them wrong, against their very best efforts. We are lucky to have accepted both.

The price for devoting yourself to personal progress is perfectionism, and the price for honesty is admitting that we are anything but perfect.

What we do is try to become the best, through months and years of toil, all the while understanding that “best” is just one aspect of itself and losing is simply another way to learn how not to win.

I’m so going to learn how not to win this year! 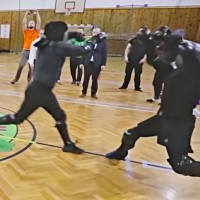